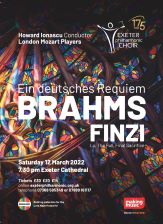 
It was two years almost to the day (14 March 2020, just before the first Covid lockdown) that I last had the pleasure of reviewing a concert in Exeter Cathedral by the Exeter Philharmonic Choir. Then it was a performance of Beethoven's mighty Missa Solemnis; this occasion, on Saturday 12 March 2022, was of the German Requiem by Brahms or, rather, Ein deutsches Requiem, as the choir sang the work in the original German. The choice of this major work within the choral repertoire served as a grand celebration of EPC's 175 uninterrupted years of performance since its foundation in 1846 – quite an achievement, and 20 years before Brahms composed the Requiem! It was pleasing, too, to see a well-filled Cathedral to mark the occasion.

This Requiem is not a liturgical work as such, with Brahms choosing not to set the traditional words of the Mass. Although the composer's approach towards the Christian faith seems to have been somewhat ambivalent – Christ's name is not mentioned in the work – nevertheless he seems to have known his Bible well, with a carefully considered choice of the texts from the Old and New Testaments that comprise the Requiem. Through these words, the work takes us on a journey from anxiety to consolation, often within the same movement.

For conductor Howard Ionascu this work presented a real challenge. The choir sings in all seven movements, which represents a demanding stay of stamina throughout the 60+ minutes of the work. Even a short interval at this performance between movements III and IV offered little respite! But Howard Ionascu and his EPC forces are to be admired for keeping the energy levels so high, with no less vigour in the great fugue of the sixth movement than that which ends the third. Some frailties in choral entries and ensemble notwithstanding, the performance gave the audience a real sense of the mix of anguish (or as Ernest Newman put it, 'drastic, grisly paintings of the nothingness of man') and consolation that is such a feature of the work. Diction of the German text was good.

Two fine singers took on the solo roles. Jessica Cale's beautiful soprano voice, easily encompassing the high tessitura of her part, led the consolatory fifth movement in a reflective and moving manner. Singing in the third and sixth movements, baritone Timothy Nelson brought an impressive, lieder-like freshness to his performance, with an authoritative feeling for both text and music.

Accompanying the EPC were the London Mozart Players, who provided warm, high quality support: how good, for instance, to have a rich foundation to the slow tread of 'Denn alles Fleisch es ist wie Gras' (‘For all flesh is grass’) at the start of the second movement. As ever in the Cathedral acoustic, however, and despite Brahms' often careful orchestral support for the singers, there were times, particularly in the two grand fugues, when the choir seemed to retreat behind a wall of brass and timpani. The clarity of words was lost, though the mood of joyful consolation was somehow maintained.

Before the Requiem, the concert offered us a rare performance of Gerald Finzi's Lo, The Full, Final Sacrifice, originally written (in 1946) with organ accompaniment but here heard in an orchestral guise very much in the English pastoral tradition. This is a lovely work set to words by the 17th century Richard Crashaw drawn from writings by St Thomas Aquinas on the theme of the Blessed Sacrament and well worth hearing for the first time. I enjoyed the choir's careful attention to the work's dynamics though, as with the Brahms, the balance between voices and orchestra was occasionally challenged in forte climaxes. The performance included short solo contributions from EPC members, tenor Stuart Mole and bass Martin Stubbings.

Howard Ionascu and his performers are to be congratulated on such an enjoyable concert, which was the Exeter Philharmonic Choir's annual performance in aid of the Lord Mayor's Charity, on this occasion Inclusive Exeter.

The Exeter Philharmonic Choir's celebration of the 250th anniversary of Beethoven's birth could not have been more ambitious at the concert it gave at Exeter Cathedral on 14 March 2020.  Any choir facing one of the Everest's of classical choral music, the Missa Solemnis, must meet so many challenges that Beethoven lays before it – the dramatic contrasts in dynamics and tempi, alarmingly regular visits above the stave, and two of the most difficult fugues facing any large choir; and then, specific to this concert, the acoustic of a venue that favours orchestra over choir in a big choral work.

It is little wonder, therefore, that this greatest of Masses is rarely performed and, when it is, would  benefit from a firm orchestral foundation, on this occasion provided by the excellent English Chamber Orchestra and evident from the start of the opening Kyrie.  It was a real asset to hear Beethoven's often innovative accompaniment, in the Agnus Dei for instance, played so confidently under conductor Howard Ionascu's dynamic direction.  Perhaps this confidence encouraged a prominence to the orchestral sound that in the Gloria and Credo at times overwhelmed the Choir's contribution.  But the experience of hearing these two particular movements, taken at brisk tempi which energetically drove the music forward to the heights of celebration, was undeniably exciting.  In particular, there was no slackening in the Choir's singing of the movements' vast concluding fugues which left audience members on the edge of their seats.

If the preceding movements depend on the chorus driving forward the energy of the music, then it is the soloists who must carry the succeeding, more contemplative Sanctus, Benedictus and Agnus Dei.  Here the performance owed much to the fine team of distinguished soloists, Emma Tring (soprano), Marta Fontanals-Simmons (alto), Peter Auty (Tenor) and Robert Davies (bass).   The composer's extraordinary conception for the Benedictus, dependent on a solo violin (most sensitively played by the ECO's leader, John Mills) hovering ethereally around the four soloists, was beautifully effective.

Beethoven's setting of the concluding Agnus Dei again takes us into new territory, with the singers' contributions interrupted by the orchestra with martial interjections and a presto orchestral fugue – no quiet resolution here to the Mass.  The soloists set their mark on the special pleadings of this movement, while the Choir (with an effective lilt to its delivery of Dona nobis pacem) also showed the ability to sing with real sensitivity (and here and elsewhere, just the occasional entry hesitation) in the quieter moments.

Against the background of the Coronavirus crisis, it was slightly disappointing that audience numbers were not as great as they might have been for such an impressive concert.  For those able to attend, it was as a privilege to hear the Missa Solemnis in a performance that presented the work as the uplifting masterpiece that it undoubtedly is.  Howard Ionascu and his Choir are to be congratulated on taking the opportunity of the composer's birth celebrations to share with us Beethoven's grand confession of faith.

This particular event was the Exeter Philharmonic Choir's annual concert in aid of the Lord Mayor's Charity, on this occasion the City Community Trust.