Ending the Season with a Swing 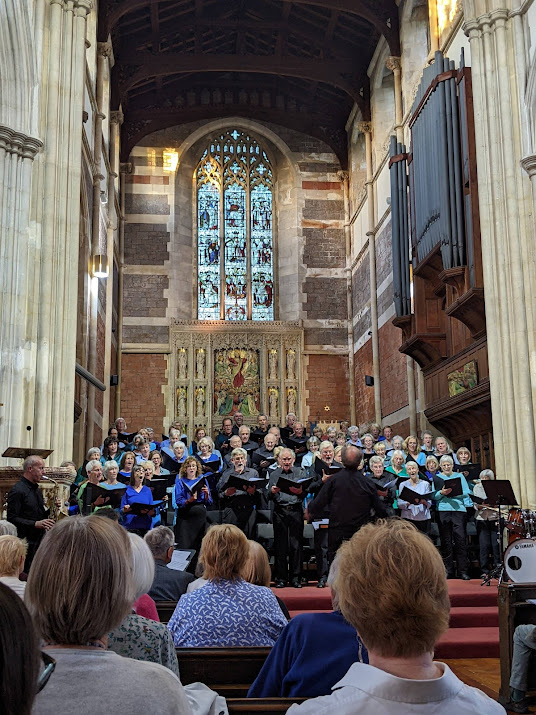 Stunning, happy, memorable are just some of words used to describe our final concert of the season at Holy Trinity Church, Exmouth.  And this review by David Batty says it all:

When did you last see a large choral society obviously enjoying themselves during a performance?  I don't just mean after the event when the singers are enthusing about an evening's music making, but actually during a concert, with smiles and joy on their faces.  Well, this was certainly the case at the Exeter Philharmonic Choir's summer concert on Saturday 21 May at Holy Trinity Church, Exmouth, and none more so than during the first performance of Stephen Tanner's Jazz Te Deum and Jubilate Deo.

The concert, conducted by Stephen Tanner, the Choir's Associate Director of Music, focused on the theme of Sacred Jazz, a concept carefully explained in Tanner's programme notes for the occasion.  His new work fused two familiar sacred texts with music in the jazz idiom composed during the coronavirus pandemic lockdown.  The Choir brought an infectious swing to the piece enhanced by the combination of saxophone, piano, double bass and drums that provided the instrumental accompaniment.  The beautiful and atmospheric playing of saxophonist Steve Wiltshire was especially effective in sustaining the special jazz idiom that underpinned Tanner's ambitions, but Andrew Downton (piano), Phil Williams (bass) and Ryan Carter (drums) all had their part to play in a successful first performance, which was met with warm and prolonged applause from the large audience.  The work deserves a second outing, and more!

Earlier in the concert, Stephen Tanner conducted the Choir in three traditional spirituals in his own, effective arrangements (I especially enjoyed Didn't my Lord deliver Daniel?), while he then joined Andrew Downton in a performance of Richard Rodney Bennett's Four Piece Suite: Divertimento for Two Pianos, a lively composition touching on samba, country blues and ragtime, perhaps not helped on this occasion by the heavy bass of the two electric pianos.  The concert had opened with music by Will Todd, a composer who has made a prominent name for himself in a wide range of musical styles including his jazz-based Mass in Blue.  On this occasion we heard another jazz-infused work, four of the six songs that make up Todd's Songs of Peace, quieter in mood than the Tanner work, but well performed by the ever-attentive Choir and the accompaniment of piano, bass and drums.

The concert's repertoire could have presented a real challenge for the EPC singers as they moved outside their usual comfort zone of choral classics, but they met the challenge with lots of enthusiasm, accuracy, smiling faces … and swing!